I got into a conversation about worry yesterday.  My friend was stressing about a trip later this month that could pose some personal challenges.  There would be people there from an old life and a different moral background, a lot of things that were familiar but no longer appropriate.  They were worrying about whether to go at all, whether to go alone or with someone, whether to take it as a character-building challenge and be a good example for everyone else.  I watched them change their mind, in print, twice in a single weekend.


I was reminded of a quote I've heard in church for years, that life is not a sprint but a marathon.  Neither of us run, so... "life is not a track day but an enduro".  I've ridden two track days at Virginia International Raceway.  By mid-afternoon, I knew the track so well that my last six lap times were all within 5 seconds of each other over a 2 mile circuit, in traffic.  Now, I'm not that great a race rider, so this reflects the nature of the game.

The pavement was perfect and clean, and I could see everything in front of me.  I was replaying each of the 17 turns in that track mentally over lunch and for weeks after.  It was predictable and controlled.  Honestly, I should have improved more.  Look at all that pavement...

The rider behind me was my instructor.  During one of my fastest laps, he passed me, in a turn, on the outside, waving one hand for me to follow him.  Puts all my stuff in perspective.

Then there's enduro.  I've been riding a lot of enduro this summer.  You're on a perfectly good trail and come to a fork, so you take it.  You round the curve through the trees and can finally see about 50 feet in front of you.  One side of the trail is exposed rocks and the other is dirt with a gully down the middle, and you are closing in fast.  The shoulder of the rock side is the face of the mountain; the shoulder of the dirt side is a cliff.  It's like this every few minutes all day, and it's the most fun I have in my life right now.


There are always choices.  There are occasionally choices that are life-changing, like cliffs and rock walls.  I've hit one rock wall, and I paid for it.  I've come within inches of the cliff a dozen times, but those don't really count.  On the trail mentioned above, I took the rock side.  I like rocks.  Around the bend, the gully crossed the trail and pinched me off.  I had to jump the gully (sideways across the trail, mind you) onto this narrow stretch of dirt with a cliff on the far side.  I felt one wheel actually skirt the edge.  That was only the midpoint of a long day's ride, too, so it wasn't like I could even dwell on it.  It wasn't a near-disaster, it was just "riding". 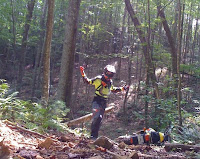 Does any of that count as a bad decision?  I was a capable rider, and I did what I did on purpose.  I was taught once that, if your heart is committed to God and you have asked for direction and are actually a good listener, that what you do will be within God's plan. No finger of fire writing on the wall, no booming voice, just you acting as the hands and feet of God.  This isn't sacrilege; it's reflected in everything we do.  Here on Earth -- grin -- we call it "expertise". There's an axiom in athletic training that states "practice makes permanent".  Not "perfect", but "permanent", because you can practice things the right or wrong way.

I was in an off-road park with my wife one day, who is a talented flat-track racer but hates hill climbing.  Our trail through the woods had forks on each side marked "Hill Climb", so we went straight.  Around the bend, through the trees, the trail went straight up the hill.  I took a quick visual scan.  Clean, dusty rock about 5 feet wide on each side, eroded gully down the middle deeper than my wheels.  "Go left", stand up, throttle up, top of the hill with a goofy grin.  Never hesitated.  My wife got halfway up and hit a tree stump about 4 inches wide and high.  In a full 6 feet of clear, bare hillside, she found a stump the size of a coffee cup and tipped herself upside down in the gully.

It's a phenomenon we call "target fixation".  Target fixation is a panicked attention given to the object of our fear instead of the path around it.  Look where you want to go, not where you don't want to go.  If you go where you want to go, then distractions remain distractions instead of obstacles.  Dawn doesn't fixate at ALL on the street, but she hates hill climbing.  This is the reason I can go up a hill like a goat, on purpose, but trying to avoid the one big rock can be disastrous.  Observe.

When you've listened, then acted, listened, then acted, for long enough, you begin to act in the spirit of the law, the moral character behind the directions you've been listening to.  We can make mistakes because we're human, but our mistakes tend to be less catastrophe and more nuisance, and we recover from them better.  I believe there exists a "perfect line" sometimes, an best decision with the easiest outcome.  Other times, it is a matter of walking through the valley of the shadow of death without fear because I am not alone.

That picture of me looking down at my bike in the trail... I landed on my feet with the bike beneath me, and I rode home with a smile on my face.  My only screw-up was that I tried to stop and second-guess myself on a muddy, rocky slope because there was a fallen tree alongside the trail.  Not even "in" the trail.

I kid you not; if I'd have just kept going, I wouldn't have fallen in the first place.
Health life and faith motorcycles

Popular posts from this blog

23:17
I finally saw Batman vs Superman: Dawn of Justice today. I'm a lifelong comic books fan. I was a collector, then an occasional reader, and now basically a nostalgic with internet access. I have volumes to say about DC and Marvel and their respective cinematic universes. It's ironically probably the thing I've written the most draft copies about lately, the reason this blog's getting new posts. I wanted to love this movie. I really did. I questioned the selections of Zack Snyder and practically every cast member, until I resigned myself to judge the finished product instead of every berry and nut in the recipe. In one nighttime scene in a burned-out vintage stone building in Gotham, there was colored lens flare. There were dream sequences, some of past memories, but some future-telling in great detail with no explanation of how. There were several 300-style slow motion passes for no reason whatsoever. Even the soundtrack invoked tones from 300's battle scenes. Ea
Read more

You've caught me at a very strange time in my life

16:15
Middle-school boys in Tacoma, WA have started their very own after-school program, a "Fight Club" in a school bathroom.  One of the broke the first rule of Fight Club as shown here .  Check that story first, I'll wait.  I am not a parent, but I'm an uncle and former high school teacher.  I'm bothered by the fighting in a tiny measure, but I'm shocked and disappointed by the school's response.  This struck an immediate impression in me that may disappoint some people who've "known me all my life".  All I can say is, "all your life" usually means "while you were a child", and that was a long time ago. "Fight Club" is one of my 2 or 3 favorite movies of all time.  There, I said that.  The original version is not family-friendly (to an extreme), but it's how a lot of people relate to their world and I acknowledge that on artistic merit.  The cable edit is still good enough that I'll watch it a couple times
Read more